I occasionally format books for others so they can publish to Amazon, Smashwords, in print, and to others.  It's rare that anyone sets up their documents to be automatically formatted while they write like I do, so I get a lot of weird formatting issues, none of which relate to the quality of writing, just the way it looks on your eReader.

I had an issue where every time I hit enter on a document I was formatting, it would indent the entire next paragraph instead of the first line.  It changed styles from "Normal".  It took me a couple of hours to figure it out and fix it.  Googling led me to a bunny-load of solutions for other problems, mostly to do with indentation.

The document I'm formatting in this case is "Vanx Malic: The Tome and the Lens" for M.R. Mathias.  You can read the beginning of the series here: The Legend of Vanx Malic: To Kill a Witch  The series is excellent and I highly recommend it.

You'll see in fig 1 that the new paragraph that I tried to create moves over instead of lining up with the others.  I'm using the "Normal" style edited to fit my book.  However, when I hit enter, it stops using the "Normal" style.  It didn't show me which style it switched to, so I spent a lot of time experimenting how to change it.

The highlighted section shows that the entire paragraph was indented 5 spaces to the left.  If you look at the arrows in the ruler at the top, you'll see that the bottom indent is moved to the left of the shaded area instead of lined up with it.

To fix this, you need to modify the style you're currently working in. (fig 2)  In this case, we're working in the normal style.  Right click on it and select "Modify"

It was here that I discovered the issue in "Style for following paragraph" (fig 3 (I have a sudden craving for figs . . . ))  The style in this case was "Normal Indent", which indents the entire paragraph.

I changed that to "Normal" instead of "Normal Indent" and from then on, everything worked the way it was supposed to.

The chances of the average user ever having a problem like this is minuscule.  However, if you do, here's the solution.  This can apply to any style that you may be using in Word, whether it be normal or a heading style.

There are tons of recipes for pumpkin pie.  There's nothing too far off about this one.  It's a combination of other recipes I've worked with along the way.  I make the pie crust from scratch, but use canned pumpkin.  It's heavy in spices unlike most store bought bland beyond belief pies. 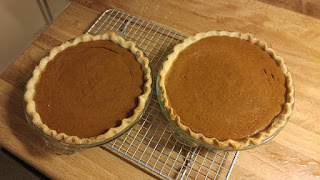 WARNING: There are vastly different qualities of spices. If you get a cheap bargain brand cinnamon and nutmeg, you may want to add a little extra unless you hate flavor. If you get a high quality Saigon cinnamon, you can always cut the amount you add.  Up to you.

Note on spices:  I usually dump in more than I have written down here, but that's just me.

I bake my pies in glass pie pans because I believe it cooks them the most evenly and doesn't interfere with the flavor.

Pie Crust
I made the recipe for pie crust a separate blog post.  You can find it here: http://ryallon.blogspot.com/2017/12/recipe-pie-crust.html

Pie filling Ingredients
(This is for a single pie, I usually double to make 2 pies)

0. Preheat oven to 400º
1. Combine pumpkin, sugar and spices in a separate bowl.
2. Beat eggs in your primary bowl
3. Fold in pumpkin/spice mix and then beat with a whisk until mixed.
4. Gradually stir in evaporated milk until you have a creamy mix.
5. Pour into pie crust.
6. Cover edges with tinfoil to prevent burning of crust and outer filling. 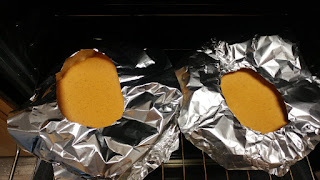 7. Bake in 400º oven for 50 minutes.
8. Remove foil and bake for another 15-20 minutes until toothpick inserted into the middle comes out clean.

There are countless recipes for pie crust.  This one is a slight alteration of the one my mother taught me.   I always make pie crust from scratch.  They taste so much better than anything you can buy from the store. 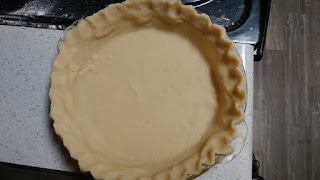 NOTE: I bake my pies in glass pie pans because I believe it cooks them the most evenly and doesn't interfere with the flavor.

Pie Crust
This is for a single pie crust, I usually double to make 2 pies.  Also, If you have a pie with crust on the top, or latticework crust, double this for 1 pie.

Flour: 2 cups
Salt: 1tsp
Shortening: 1/2 cup
Unsalted Butter: 1/4 cup
(You can do all shortening or all butter, or you can switch the ratios from above.  I like the consistency that shortening adds, but I like the buttery taste.  I've found a combination works best for me.)
Cold Water: 5tbsp

Directions
30 minutes by hand, or 15 minutes with a Kitchenaid mixer

1. Mix flour & salt.
2. Cut in shortening until pea size. (A Merlot 7qt Kitchenaid Chef's Catalog Special
Edition Mixer purchased for $35 at a warehouse sale makes this far easier than using a pair of butter knives. (It's okay to hate me now.))
3. Sprinkle water in 1tbsp at a time.
4. Toss lightly with fork and form dough into a ball.
5. Dust clean surface with flour, flatten dough into pancake shape. Then roll with rolling pin until proper size for pie pan.
6. Roll pie crust onto rolling pin. Place pie pan underneath and unroll crust over pie pan.  Lift edges while gently pushing into bottom corner of pie pan with fingers.
7. Trim edge until a inch of crust is left all the way around.  Fold edge of crust under to create a ridge around the top of the pan.
8. Scallop the edges, using two fingers of each hand next to each other and thumbs in between.  Go around the edge.
9. Add whichever pie filling you like and you're good to go!