Why am I creating this bibliography?

errrrr, the emo bunnies tell me that wasn't very polite.

They also tell me I must apologize.  Therefore, I apologize.  I am truly, deeply, sincerely, utterly, exceptionally . . .

Laying it on too thick

A friend recently asked me for a list of all my books with links.  I said sure . . . then I went home and realized I didn't have one.  So here it is:

Bibliography
Note:  Any book that says FREE! is for the ebook copy only.  I am not able to give away printed copies.

My full-length novels are set in the world of Ryallon.  They are high fantasy with rogues, knights, dragons and flower children.  You can get them at the store where you found this one.

The Wyvern Trilogy (Parallel to the Willden Trilogy, set in time after the Dralin Trilogy)

The Crazed Trilogy (Set in time after the Willden Trilogy)

Coming soon:
The Morhain Trilogy (Set in time after the Willden Trilogy)

Novellas (Halfway between a novel and a short story)

The emo bunnies tell me I need to write many more.  As I do, I will add them to this list.

"Liquid", Book 2 of the Wyvern Trilogy

"Liquid", Book 2 of the Wyvern Trilogy, and Book 8 of the Ryallon Series is now available for PRE-ORDER.  The book's official release is August 15, 2015.  If you reserve a copy now, it will be downloaded to your ereader automatically on the release date.

Setting the book up for preorder allows me to market it while the final rounds of edits are going on. I have a few beta readers working on looking it over now. Once that's done, I'll take another month to go through and do more edits to polish it and make it pretty.


Meanwhile, any preorders made will be counted as sales on the day that the book goes live. That will shoot it up the rankings, hopefully enough that it will catch extra notice and sell more copies.


If the preorders do well, then bookstores might give it a little more promotion, which would generate more sales.


If I get more sales, then at some point, I might make enough to write full time for a living, which means I would be able to write 2-3 books a year instead of just 1 here and there. 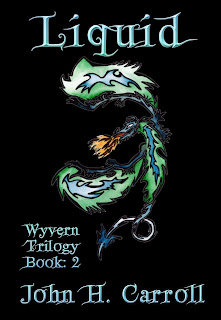 
Book 2 of the Wyvern Trilogy

Pelya Jornin is an agent of the Blue Wyverns Mercenaries. She and her apprentice Tina investigate internal corruption and external threats to the group. A year and a half since graduating from the recruit program, they have performed their duties with exceptional success.

Commander Brynin of Covert Services now tasks them with investigating whispers of a potential attack in the Kingdom of Swelth. Someone may be trying to steal a newly made Liquid Wyvern, an enchanted artifact priceless to the group.

The commander also charges them with investigating rumors of the Rojuun. The creatures are her personal obsession. Gossip of their existence has cropped up in Swelth. It is the commander’s hope they will be able to learn more about the mysterious denizens of the underworld.

Pelya and Tina embark on a dangerous mission through the kingdom of Swelth. It takes them into the beautiful and perilous depths of Ryallon where danger awaits them at every turn. Along with them comes an odd young wizard by the name of Jolen Klunjun. He practices a lost art called Throuala Magic that is just as much of a danger to his allies as it is to his enemies.

"Liquid" is the sequel to "Wyvern".  If you're interested in reading that one first, here is an introduction: 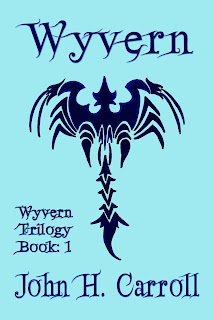 Book 1 of the Wyvern Trilogy

Pelya Jornin rides away from Dralin, never to return. Nightmares travel with her, haunting the lonely roads that threaten to drive her mad. The dangers within her own mind outweigh the perils of traveling alone.

The Blue Wyverns are a mercenary group dedicated to providing safe haven to any woman who arrives at their door. For centuries, they have grown and their power now extends throughout the Kingdom of Eddland and into bordering countries. They protect the roads and merchants of the countries with waypoints and well-trained companies of women soldiers.

It is Pelya’s intention to join the Blue Wyverns. However, things are not as they should be. Rather than being welcomed, Pelya is regarded with suspicion and contempt. The Recruit Program is unwelcoming and in disarray.

Pelya befriends other young women who also look to escape hidden pasts. Rather than admiring her experience and knowledge, they find her to be reckless in her actions. Pelya draws into herself, fearing loneliness even in the midst of company.

Will Pelya’s mind conquer battles that cannot be fought with a sword? Can she escape the eyes that haunt her sleep? Will her new friends discover the secrets of her past? Who will turn out to be a true friend and who has deception in their heart? Intrigue and danger surround Pelya as she learns the history of the Blue Wyverns. Will the beginning of her new life bring about the end?

The artwork of the Wyvern was done by Rachael Schiller, a very talented young up-and-coming artist.  I made white and black versions of the cover.  The black was chosen by fans and because it fit the story better.