This is my fourth post on the maps of Ryallon.  My maps were originally drawn by hand, but I've gradually improved them using GIMP.

It's interesting to see the changes that have happened along the way and how things have evolved. :)

Since my last update in 2013, I've cleaned up a lot of the lines.  I've created custom brushes in GIMP to make all the icons uniform.

The Iynath Empire is still untouched as are a couple of other countries on that side of the map.  I don't have anything happening over there any time soon, so it can wait.

The continent of Nulanea is bigger than Asia (Don't hold me to that. I'm a writer, we change our minds more than is healthy)

I intend to work on colorizing things next.  First will be all the rivers in blue.  I have a Bamboo brand graphic tablet to use now.  After that, I plan on colorizing the brushes used to make the icons like the mountains and trees.  Then I'll color some of the more open areas to give a better feel for the landscape.

Along the way, I'll continue adding details of cities and countries and adding more names.

Continent of Nulanea, Ryallon.  This is the newest version with ocean and lakes drawn in blue. The dimensions of the working copy are 9034 x 6589. (This version is reduced to improve loading times.) 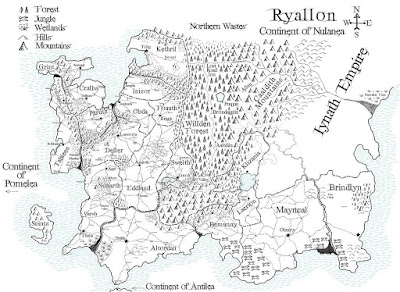 This is the second hand drawn illustration of the Norther Continent of Ryallon and the first version that I scanned into the computer.  The map above is what I've accomplished through editing in GIMP little by little until I reached the above product.  At this point, I hadn't named it Nulanea yet. 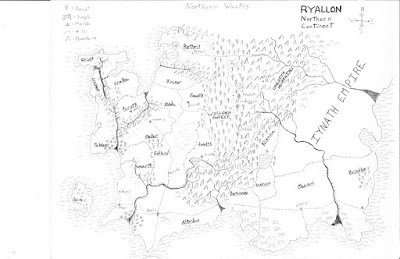 I refined the map of Paruth, which is the setting of Cloudswept and Sidetracked.  These smaller maps are all taken off the refined map above 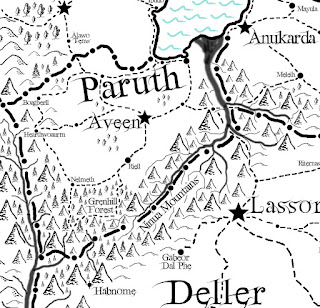