Book Review: Upon the Fulcrum of War, The Aielund Saga Book 5

Book 5, Upon the Fulcrum of War 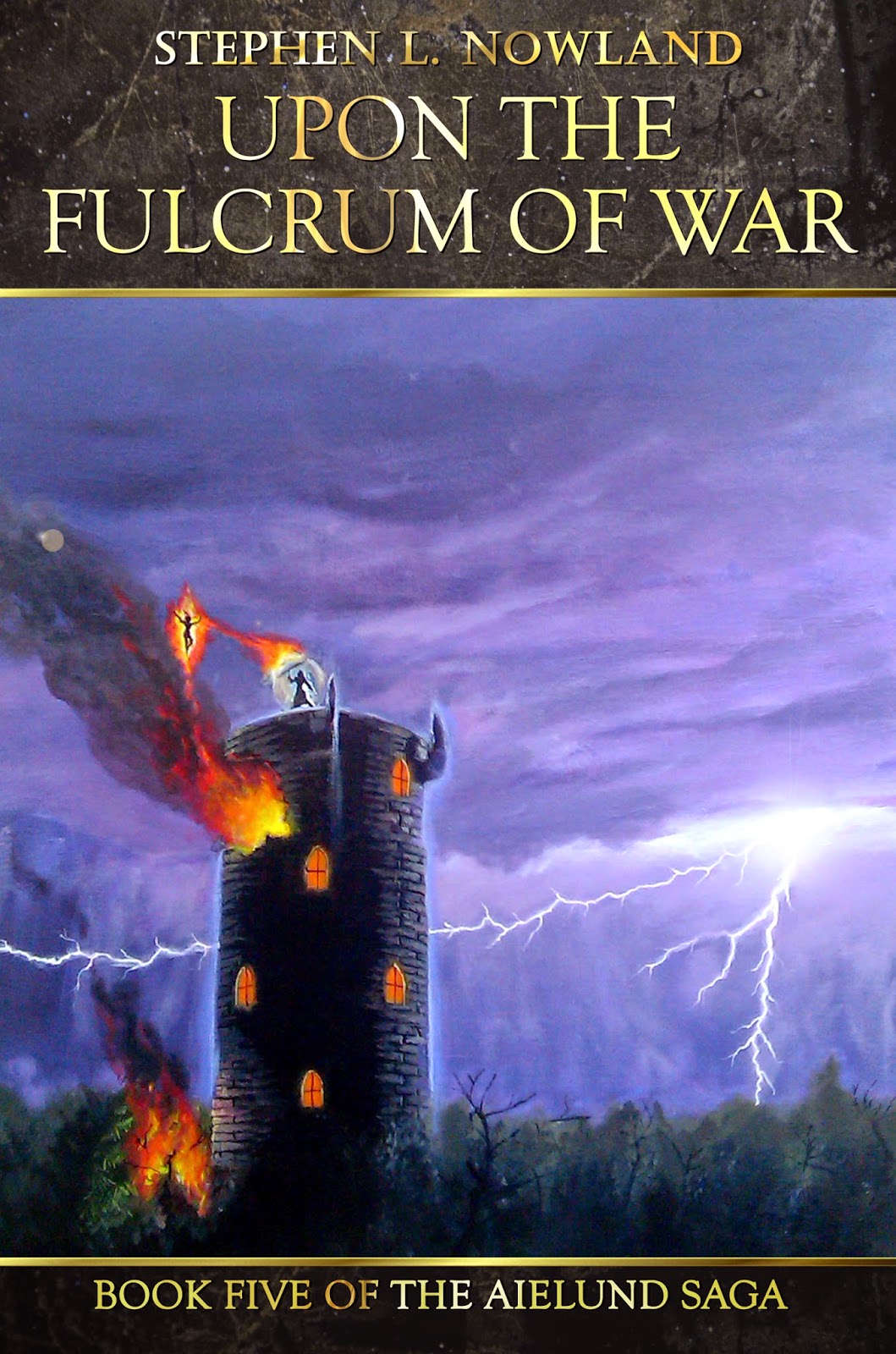 Two years have passed since the narrow victory at Fort Highmarch, and Aiden Wainwright now commands the rebuilt fortress as Baron of Highmarch. But he finds himself helping to perpetuate a war against the neighbouring Kingdom of Tulsone, with no end in sight and a body count climbing ever higher. Two kingdoms, locked in struggle and unable to break free from the decades-long enmity which propels them toward destruction.Scarred from his experiences, Aiden joins with some of his old companions and attempts to force a peaceful solution to the conflict, all the while convinced the king and his pet wizard have taken the shell of the ancient armour and seek to use it to bring a new era of tyranny to the realm. When the truth is finally revealed, events take an unexpected turn that could bring final devastation to both realms.

As it says in the description, this story picks up two years after the 4th book ends.  It is the beginning of a new series in a way, though staring many of the same characters.  Aiden, the main character in all the books is wiser, yet troubled.  He's been working as a pawn . . . errr politician . . . errr baron, running the fortress he helped rescue.  The moment word comes that someone needs help, he blows that popsicle stand and gets back to adventuring as is only proper.

The characters in the story have evolved even more and the interpersonal relationships show an intriguing complexity.  Mr. Nowland weaves the moral conflict of what good and evil truly are as he puts the characters in quandaries that would drive a normal person to madness.  The characters do the best they can to survive, all the while keeping how they truly feel about the author to themselves.

The battles are intense as always and there's no telling who will make it and who won't.  It feels as though the reader is there beside the characters, worrying for their safety.  Even more powerful spells light up the battlefield, taking the imagination to new heights.

As far as criticism, I would have liked to see a new major character thrown in the mix with the adventurers.  I think it could have given everyone a new dynamic to work off of.  Toward the end there was one person that was part of a twist I didn't see coming.  I believe that character will be more prominent in the next book and I look forward to it.

This book ends on a bit of a cliffhanger, leaving the reader desperate to get their hands on the next one.  I'm going to be very interested to see how it turns out.

As with all of Mr. Nowland's books, the dialogue has humor scattered throughout, the battle scenes are vivid and intense.  If you enjoy rousing, epic adventures, this is an excellent series for you.

Having a fabulous son who just happens to be gay, I spend a fair share of time paying attention to what happens with gay rights.  Gay Marriage is one of the hottest topics in the United States right now.  On October 6th, the Supreme Court denied petitions to review same sex marriages, which essentially allowed many states to proceed with allowing same sex marriages. Scotusblog

A friend of mine who happens to be an experienced lawyer did a write-up on it that explains the decision.

There's a lot of misinformation going around about what are "states' rights" vs "Federal overstepping", and what legalizing gay marriage means in terms of expanding that to other lifestyles, so here is my brief analysis of the situation for anyone who may still be confused on those points:
The gay marriage ban was an unconstitutional abridgment of rights, which is a federal matter, as are all Constitutional challenges. The Court of Appeals overturned the ban based on that reasoning, and by SCOTUS refusing to hear the cases, they have effectively given the Court of Appeals' decision the green light as to its its validity. This is how the judicial branch of the government operates, and the entire reason it was created. By design, it is in place to prevent states from encroaching on the rights of their citizens under the justification of it being a "state issue". Just because you don't like the outcome doesn't mean that you somehow had your states' rights taken away. It just means that you were wrong to begin with. The concept of marriage falls under contract law, which is indeed under the authority of the judicial system to regulate and decide.
People seem to forget that it is called a marriage CONTRACT for a reason. There is no other area of contract law that places prohibition upon competent parties wishing to enter into a contract, other then marriage. The real issue here is not whether or not marriage is a religious or secular institute, it has to do with the unconstitutional curtailing of both personal liberties and the right to enter into a contract by competent parties who are in agreement to contract. Marriage is a legal contract that confers certain rights and obligations upon the parties entering into the contract, just as any other contract would. From a legal perspective, it is no different than two corporations signing a contract to merge.
Churches do not have to perform a wedding ceremony if they believe it violates their religious tenets; that is their right under the freedom of religion clause - the legal contract of marriage itself is *not* a religious issue, therefore, religious institutes and states have no right to curtail *anyone* who is competent to enter into a legally binding contract from marrying. Do NOT mistake a religious wedding ceremony for legal contract rights. If marriage was solely a religious-based activity, then there would be no way to have a non-religious marriage ceremony performed. However, this is not the case. A justice of the peace, a judge, the captain of a ship, and a notary public can all legally perform a marriage ceremony, none of which are affiliated with religion. A marriage contract is a legal issue, it just happens to touch the fringes of religion, which is where people seem to get confused.
As for the argument that legalizing gay marriage will somehow lead to opening the door for legalizing bestiality, child marriages, or legalizing "marriage to a vacuum cleaner", as I saw someone say on another thread, that goes back to the contract part of marriage. An animal, a child, and inanimate objects CANNOT be a party to a contract legally. Therefore, those relationships will NEVER be legal, since one of the "parties" to the marriage or relationship do not have the legal standing to enter into a contract. So that argument is completely invalid and totally off-base.
Feel free to provide this information to others who do not understand this concept, please. I have seen dozens of comments on various threads throwing out all kinds of ridiculous statements that are completely wrong, so perhaps this will help someone counter some of the insanity going around.

I believe that homosexuality is completely natural.  People have rights regardless of their sexual preference and any activity to prevent those rights is an act of bigotry and suppression in my eyes.  Humanity has spent a great deal of effort coming out of the dark ages of ignorance.  It's vital to continue that progress.