I recently forced my son to watch Logan with me.  Pretty sure that makes me a horrible father.

This is a horrible movie.  The good guys are miserable and really not worth rooting for.  The basic premise of the movie is that this world sucks and it's going down from here, so let's just slash everyone.  We should set a fabulously bad example for the only children left like us while we're at it.

The actors in this movie are far too good to give such a horrible script to.  If I was Wolverine, I would have slashed the script and stabbed the producers through the chin like he does to the bad guys no one really cares about.  If I was professor Xavier, I would have mentally convinced everyone not to waste their money.


I have no idea what the critics and fans who said this was good were thinking.  Maybe the little girl in the movie threatened to shove them in a locker after school and stab them through the door if they said anything bad.  Hard to tell.

I've been a comic book fan since before I could read.  I enjoy most of the movies related to comics and I'm not even too worried about whether or not they stick to canon as long as they're entertaining.  This was not entertaining.  I realized I've become immune to seeing fake blades and blood all over the place and it's become more of a yawn than it is impressive.  There's no shock value left to the gore.  They just do it to hide the fact that there's no real plot or decent dialogue.

I suppose I could go on, but I've already wasted my money.  I have no desire to waste further words.

Cloudswept, Book 3 of the Wyvern Series

Book 3 of the Wyvern Series and the 9th book set in the world of Ryallon.  This is a continuation of Pelya's story from the Dralin Series. 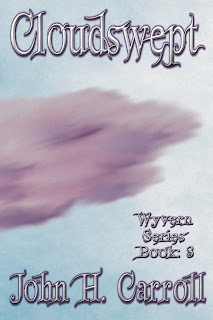 Book 3 of the Wyvern Series

After banishment from Dralin and expulsion from the Blue Wyverns, Pelya Jornin is now an agent of the Cloudswept Bank charged with recovering valuables. The job allows her to travel the world while keeping her skills sharp. Past failures have led to a vow to travel alone so as not to endanger lives of those she cares about.

When the bank offers her an assignment to rescue one of the mysterious Rojuun, she jumps at the chance to learn more about them. Rumors of Rojuun attempts to enslave the human race have worried her since her first meeting with them in Dralin and more so since her failed mission in the mountains south of Swelth.

The mission takes her deep into the war-torn country of Paruth where women aren’t allowed to wear swords and magic is forbidden. Signs of the Black Scale Guild appear, bringing further intrigue along with grave danger.

Calren has avoided mandatory conscription into his lord’s army for as long as possible, but time is up. Rather than join the endless and futile war, he packs his things and abandons the farm for a life of adventure. But Paruth isn’t the sort of kingdom where deserters are tolerated.

Verna, a Druid wilder than the forest she grew up in, needs to escape heartbreak. She skips down the road to learn more about humans and discover why they try so hard to kill each other.

Pelya seeks answers to events in her past that sent her life spinning. She fears what those answers may bring. More than anything, she worries about the fate of those who would attempt to be her friends. Will her actions get people killed yet again?