Book Review: The Fortress of Gold


The Ballard Chronicles is the sequel of The Aielund Saga books written by author and artist Stephen Nowland. They follow the adventures of Aislin Ballard and companions as they track a powerful villain.

Book 2, The Fortress of Gold 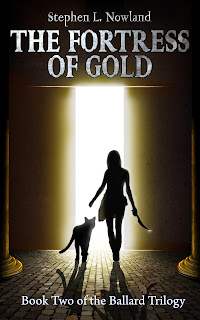 Aislin Ballard and her companions journey south in pursuit of the man behind the assault on her home town. Together, they must cross dangerous desert lands, brave bizarre magic and avoid clashing armies as they travel to the legendary mountain city of Aurumgaard. There, they may find clues to his location, but risk being swept up in regional events beyond their control, culminating in a confrontation that will test their resolve, forcing them to question how much they desire to see their quest through to its ultimate conclusion.

The Ballard Chronicles follow the events of the Aielund Saga.  However, it is not necessary to read those in order to properly enjoy this series.  It calls to the actions and deeds of the Saga as backstory and fills in only what you need to know to understand events in this one.  This is safe for young adults, with mild fantasy violence

Aislin Ballard is one of my favorite characters in any of the thousands of books I've read.  She's strong for a 13yr old girl, but not unrealistically so.  There is exceptional depth of character with the optimism and vulnerability of a young woman.  I think the author nailed the struggle of her youth in an adventuring party perfectly.

One of the things I liked about this book is how Stephen Nowland highlighted the resiliency and determination of human spirit even in the worst of times.  One of the author's strengths, which I've noted in previous reviews is that he allows the women to be strong, but not lose their femininity.  The women occasionally need saving, but no more than the men.  If anything, the men need more saving than the women.

Once character I'd really like to see more of Jaz.  She's an awesome character, my favorite in this series I think, but it felt like her personality wasn't allowed to blossom and show through quite as much in this book.  She did a lot of things, but it seemed largely in the background.  Everyone else in the group shone, especially Madelyn.

I love the steampunk feel of the Kurhain civilization, especially with the muttonchops and mustaches.  Major Maximilian Strauss is a superb character who brings a new dimension to the story.  Switching back and forth between him and Aislin was a perfect touch. It was hard to root for him when his country was the one causing so much trouble for Aislin's group!

I can't wait to see where this group goes.  The hints Stephen Nowland put forward for future books are maddening.  I want to know what happened to ***!  I'm glad *** is back with ***.  I know the Blue Man is going to come back, but will he bring his group with him?.  I'm really worried for ***.

With most Indie Authors, you have to watch for spelling and grammar issues.  Not so with these books.  They are a professional quality and well edited.  There are no wasted words or scenes.  Everything advances the story in a way that you stop hearing the author's voice.

Book 3 is due out soon and I'll review it shortly thereafter!

I was one of those kids who daydreamed his way through school. All the little adventures I'd concoct in my mind were far more interesting than math or tests or sport. Somehow, I passed the important bits (art and english) and moved on, but always with a creative perspective to my life.

It was around 1992 when the magic of reading really sunk into me, for it was then I discovered fantasy novels. Feist, Salvatore & Eddings showed me worlds that fired my imagination, and from that point on I knew I wanted to write the stories that flitted around the recesses of my imagination.

Unfortunately, I spent most of the next fifteen years dealing with poor health, including resultant chronic fatigue syndrome which interfered with my life immeasurably, but gave me ample time for thought. An abortive attempt to create a story happened around 1996, but I look back on such things as stepping stones on the road to where I wanted to be.

My first complete novel was actually done back in '03, but it was a derivative work based on elements from other stories, something I didn't realise until after I'd written it. The mind can do funny things if you don't keep it on a tight leash! Still, there were some unique points to the story I kept, so I scrapped the rest and began a completely new for Neverwinter Nights, that RPG video game thing you may or may not have heard of.

The story was so successful (filled with rich, creamy character development) that I lamented that only people playing the game would ever see it. In 2009, with my health improving, I resolved to novelize the stories I'd written, in addition to developing the world in which they exist as the basis for a new fantasy series.

I consider those stories to be merely the first iteration of the saga, for my novels have evolved far beyond the original scope, in terms of detail, plot and character building. Looking back on it now, I can see my style has evolved a very long way from those humble beginnings indeed.

Oh, I also paint. You can expect to see more cover art with each title, becoming more technically sophisticated each time.

It is important to note here that while I am a writer, I am doing these reviews as a reader. I also know a number of the authors I will be reviewing. (I am friends with Mr. Nowland, and he even mentioned me in his acknowledgements) This is not an exchange of reviews, nor have I been solicited by those authors to write the review.  If I don't like a book, I won't review it.

In doing research for combat in my books, specifically for Pelya Jornin, the main character of the Dralin and Wyvern Series, I came across a phenomenal woman by the name of Samantha Swords.  Samantha practices and studies European Martial Arts. She also works as cast and crew in the film industry including time at WETA. She's been kind enough to answer a couple of questions I've had about combat with a sword.

Her Tumblr and YouTube have oodles of information on swordplay and the culture surrounding it in modern day. 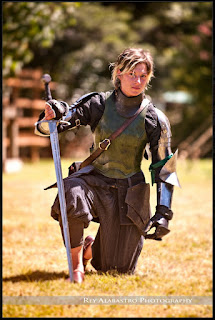 Samantha is a student of European Martial Arts. In this video, she states:

Historical European Martial Arts are the martial arts of medieval Europe. Yes, they existed. They were very complicated, very beautiful, just as like the Asian martial arts are. And, unfortunately, they died out, which is why most of us don’t actually know about them these days. But for those of us who are completely crazy about swords, we have been recreating the arts from fighting manuals- books that were left from the people who actually studied in those ancient times.

Like much epic fantasy in books, the world of Ryallon has styles of swordplay similar to that used in Europe.  Granted my characters have magic at their disposal along with supernatural abilities, but the basics still apply.

Much of my writing of combat scenes stretches the abilities of a person beyond what's physically capable.  It's exciting to imagine someone whirling through the air while spinning blades.  However, I believe it important to add as much realism into the details. Pelya Jornin's timeline has her learning martial arts, both physically and intellectually, from the age of four.  She has talent and the work ethic to become one of the best in the world of Ryallon.  She's earned it rather than just picking up a sword and becoming an insta-expert like in many stories.

Samantha is participating in an experimental live action event in September.
https://www.kickstarter.com/projects/1336679351/weekend-warrior/description

Her brief description of the event:

The Kingsmen are my faction in Weekend Warrior- an experiential live action event that will be filmed, documentary style, and challenge you in a new form of medieval-style outdoor adventure.
I’m joining forces with Skip Lipman and Ron Newcomb of the Forge Studios- they’re well known for the series, ‘The Rangers’, and also Zan Campbell of Fell and Fair, and together we’re creating this event.

I believe Samantha Swords is an inspiration for young women and anyone to explore their dreams and confront their fears to flourish.  Life can be hard to face.  Sometimes it's best to come with a sword in hand and the ability to use it.